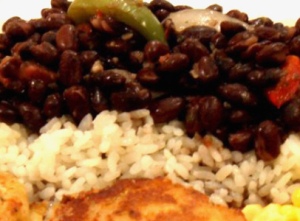 Which was the second most popular Cuban recipe in the survey I placed in Facebook some days ago? It was frijoles negros dormidos (asleep black beans – thick black bean soup). Browsing for it I found three different recipes of this typical Cuban dish which I will share with you in two “chapters”.

The first one is taken from a classic book from Cuban cuisine, Cocina al Minuto (Cooking in Minutes or Fast Cooking) by Nitza Villapol. This is the recipe for black beans soup “á la Valdés Fauly” for a big family meal, since it gives 15 to 20 servings.

The day before cook beans until soft putting enough water to cover the beans. Grind the onions and green peppers, and keep the juice from the grinding. In a pan cook this liquid adding one can of red peppers previously ground and one cup of oil. Stir-fry everything and add this to the beans. Season the beans with salt, pepper and sugar, and let it cook in low flame for three hours until thick. In the meantime add the vinegar, the rest of chopped red peppers and their liquid, and the rest of the oil.

In the 1980 edition Nitza includes black bean stew with diverse ingredients such as meat or sausages, sweet potatoes or plantain and tomato purée. According to this expert in Cuban cuisine, bean soups should always be accompanied by some cereal – rice, corn, oats or wheat – and some other food rich in animal protein to complete their nutritional value.