La Casa: the Mystery of Success*

The day of the opening of La Casa restaurant on August 3rd, 1995, was the last peaceful day at the Robainas. It was the beginning of private initiative in Cuba, and uncertainty marked the future of the new entrepreneurs who launched into adventure in a country in the midst of a crisis, ruled by a government which was traditionally reluctant to any enterprise outside the state frontiers.

At the beginning fear was a constant feeling. All the members of the family had abandoned their jobs to dedicate themselves entirely to this enterprise. The self-employment sector’s boom of the 90s gave them a big opportunity; however, it was not a smooth road. To avoid failure they relied on Manolo’s experience in the gastronomic sector, Grandma Maria’s knowledge on Cuban traditional cuisine, and Silvia’s enterprising spirit.

There were several “paladares” (as these private-owned restaurants were called) in Nuevo Vedado, the neighborhood in Havana where La Casa was located. Fifteen years later, few of the businesses from that time are still open; most of them failed due to the tangle of official restrictions, to the lack of support to private businesses or to their own inefficiency.

Having survived bad times, and having grown in the good times, Alejandro Robaina is confident that this experience will be useful to face the new wave of private-owned businesses. With the new economic opening of Raúl Castro’s government begun in October 2010, new small cafeterias and private restaurants have proliferated in Havana.

The Robaina family already knows the secrets of supply, in spite of the chronic scarcity in the country of raw material for cooking. Besides, they have earned acknowledgements from magazines and journals of international prestige; and they have a regular clientele which includes new addicts to La Casa Cuban chefs’ cuisine.

“We are not afraid of competition, because it compels us to be more creative,” Alejandro states. “Creativity never rests here,” he affirms. The most recent initiative of this thirty-eight-year-old entrepreneur is a promotional campaign through Internet, particularly in social networks such as Facebook and Twitter, which is a novelty in the island, where the development of publicity even in the big enterprises is still incipient.

One Day in the Life of La Casa

People at La Casa barely sleep. The doors of this Californian-style house, dating back to the mythical 50s, stay open during the 365 days of the year from noon till midnight.

“I cannot imagine this house in silence, living a normal life, each one in their room or watching TV at night,” confessed Alejandro Robaina, the host of the house and heir, together with his sister Karina, of Manolo and Silvia, their parents’ heritage.

Visitors are surprised by the familiar ambience of the house, which still continues to be the Robaina family house, even though from noon it welcomes travelers from all walks of life till well into the night. The peculiar décor of a Cuban house of the 20th century, with family portraits on the walls, a fish tank, and other ornaments typical of those born in this island surprise the visitors.

One hour before opening it looks like chaos is loose on the house; but everything has been calculated, not with German or English precision, but with the Cubans’ carefree self-assurance of those used to work with rigor when they feel passion about their enterprise.

Manolo goes out in his car buy fresh food in the same markets where the rest of the population buys theirs, since there are no wholesale markets here. Meanwhile, Karina sees to bookkeeping, Silvia gets ready to work at the cashier and tend to the bills, and the grandmother suggests new recipes to the chefs.

Alejandro takes care of details: the fountain on the premises; whether the tablecloths and glasses are spotless clean; the personnel’s work from the bar to the kitchen. This blond young man, who looks like a Californian surfer rather than the black-haired, Latino-type easygoing Cuban stereotype man, has earned the fame of being one of the best hosts in Havana. 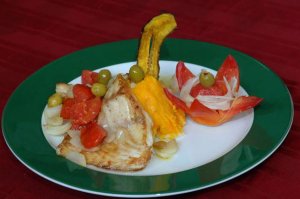 The Secret Ingredient of Cuban Cuisine

Cuban cuisine is the center of the menu, with dishes like grilled lobster, much sought for by those who travel to Cuba and the traditional “ropa vieja” (shredded beef stew). In the menu you can also find French recipes, Italian pasta, Spanish “tapas” and paella prepared and served in the Cuban style.

According to Alejandro, one of the distinct marks of the restaurant is that all the food is home-made, from the bread to the different delicious fruit ice cream, many of them served in the shell of the fruit.

“Cuba is not only beach and sun; you can also enjoy a good meal here,” Alejandro states.

The key to success lie not only in the enterprising spirit, or the family unity around the business, or the delicious dishes, or the good chefs… Simply, Alejandro sustains, the restaurant is faithful to its identity at all times. A Cuban family house with wide open doors every day of the year to share Cuban food, seasoned with a special ingredient: the characteristic hospitality of this Caribbean island.

* This article was published by the Frech website Cubania.